Night in the Woods – The Game Slate Review 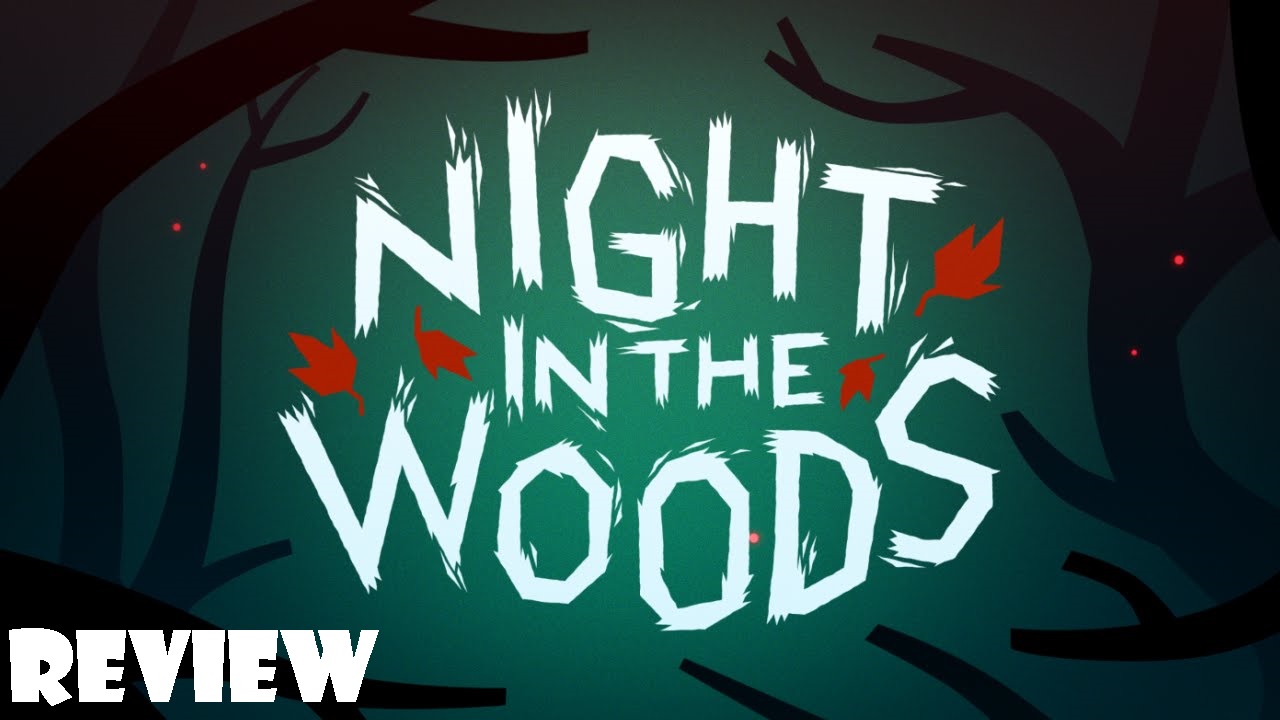 I remember coming home from university. Coming back was reassuring yet oddly terrifying. I was returning to a place that felt paradoxically the same yet different. The people I knew had gotten jobs or become unemployed but, invariably, they remained the same. At the same time, shops and cafes I grew up around and were regular haunts of mine had closed in my absence, turning into unfamiliar and unwelcoming new businesses.

There is a transition period behind moving home and it takes a little while to slip back into a routine. This is something that Night in the Woods picks up on in the opening scenes. As Mae Borowski, you have dropped out of college for reasons that are not immediately explained, and have returned to your home town, Possum Springs, a poor town in middle-America. After an initial jaunt from the train station to your childhood home, you speak to your parents and reconnect with old friends: Gregg, a reckless anarchist, his contrastingly mild-mannered boyfriend, Angus, and Bea, a high school valedictorian, who spends her days working in the family hardware store.

Mae sets into a daily routine of waking up, checking the messenger on her laptop, speaking with her mother in the morning, her father in the evening, seeing her friends, and returning home to sleep. The only sense of variance lay between the odd mini-game or adventure to one of the otherwise, out of reach locations that exist on the outskirts of Possum Springs. Pacing feels poor in these opening scenes and not a great deal happens to push the story forward. I almost gave up on Night in the Woods, though preserving through the initial slog brings out the meat of the story. 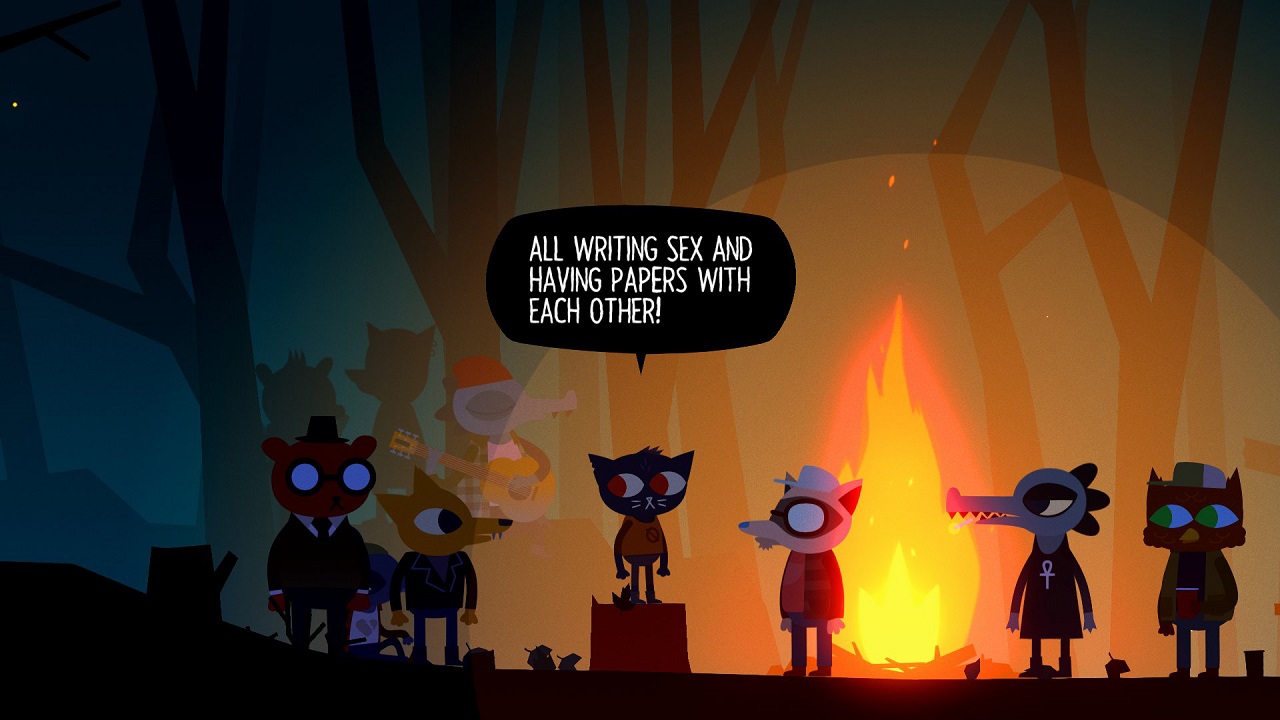 Previous pacing issues balance out in the last two acts of the game, where the narrative develops steadily. Thematically, the game takes you places where you hadn’t expected it to: Existential crisis, ennui, coming to terms with mental health issues, finding your place in the universe and, in the game’s climatic scenes, the economic woes of Possum Spring take a dark and sinister turn – oddly prominent in the Trumpian age of politics. Night in the Woods’ shift from plodding, indie-film inspired storytelling, to murder-mystery, whodunnit territory, is not entirely unexpected, due to obvious signposting at the very beginning, but the transition is handled suitably well. Such a tonal shift could have gone awry and felt contrived, but it works here.

Night in the Woods is, at its core, a sweet game, helped in part due to its cast of characters. Each of them have little quirks, failings, insecurities and strengths, that reveal themselves over the course of the game – be it through action or dialogue. I usually detest games which rely on text speech only, but Night in the Woods kept me interested during dialogue scenes, due to how likable each of the characters are.

That same courtesy cannot be extended to Mae. At least, not entirely. She can often be impulsive and selfish; insensitive to the needs and concerns of those closest to her. She redeems herself late game, but I almost ended up not caring for her at all. Potentially disastrous for a character-driven experience, but this comes with the territory when playing as a 20-year-old character. Anyone who says they were never spiteful or self-righteous at that age is probably lying to themselves. Mae is by no means perfect, but is more human than the rest of them (for an anthropomorphic cat, that is). 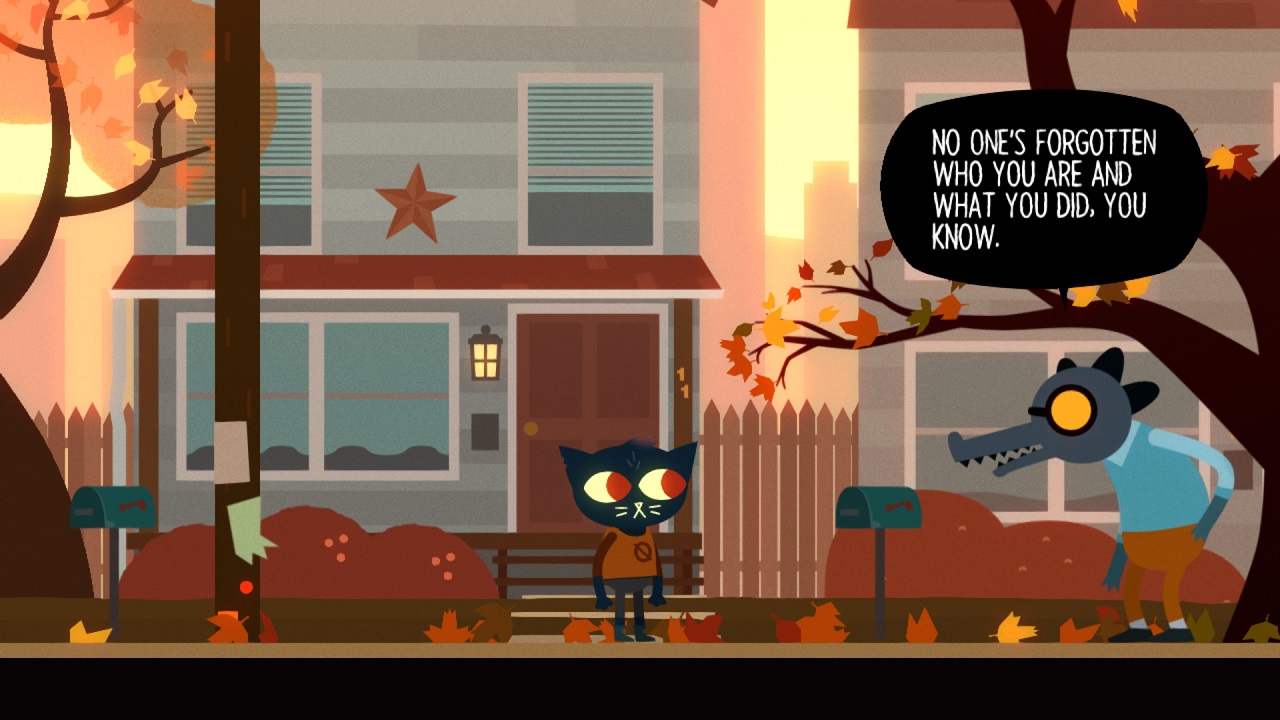 Night in the Woods makes use of a strikingly minimalistic art style, filled with bold colours, characters and items comprised of simple shapes. It is symbolic of Night in the Woods’ substance over style approach. I could push this game to 4K resolution on my modest PC, but that’s not really what this game is about and, after testing this, I reverted to the standard resolution. A twee soundtrack plays for most of the game, but once the game takes its eerier turns, the music becomes tense and foreboding.

For a game with such ambitious, narrative overtures, it is simplistic to play. You move Mae left and right and can jump for some light, puzzle-platforming. Infinite Fall occasionally present other mini-games which mix-up how the game is played, but for the most part, progression is easy. With Night in the Woods’ slow start, this is imperative, as it would lose steam very early on.

​​It’s a shame that Night in the Wood presents choices that, ultimately, amount to very little. Often, you are given the choice between spending the day with either Bea or Gregg, and while activities vary slightly, it does not affect your standing with either character or how the game ends. Night in the Woods seems to borrow from Oxenfree, at least stylistically and, in some respects, thematically, but doesn’t get the mechanic of choice-driven narrative right. It would have been good to see genuine differences between each choice, to inspire further playthroughs, if anything. In light of this, I can’t see myself coming back to Night in the Woods, no matter how much I enjoyed its characters or the story.

As a coming-of-age story, it ticks all the boxes and throws a little bit extra into the mix. It has the type of story that risks becoming sickly-sweet without the proper handling but manages to maintain a consistent tone throughout. The ending doesn’t quite have the emotional resonance or impact I was expecting, and seemed very keen to wrap things up without explaining some of the key narrative points in full, but it had a sense of hope that evaded Mae for the entirety of the story. It felt good, like Mae had settled and could move onwards with her life.