Tom went to EGX Rezzed 2018 and saw some cool stuff. What cool stuff? Have a read and find out.

If there’s one benefit from playing games at a place like EGX its that you get to ask the guys and gals behind the game why you’re not doing it very well.

Recently I understood that I love games and I play them a lot, but it doesn’t necessarily mean I’m very good at them. But being good at a game isn’t a prerequisite for enjoying it thankfully and it often yields more entertaining results. What’s even more entertaining is seeing a developer watch you blunder through their meticulously crafted game. It’s sort of like having a co-driver in a rally car race who’s also trying to sell you the car you’re driving. And the course. And also, be nice about it.

I got a chance to play a lot of games this past weekend at EGX Rezzed among the vaults and arches of London’s Tobacco Dock (‘Vape Harbour’ seems like a re-branding that’s only years away). And as with any convention it’s not feasible to play anything for the same amount of time as you would at home; you’re trying to cram a whole catalogue of games into one day after all. So, getting stuck on a game becomes an error that’s magnified by every minute that you’re not exploring every inch of every virtual world on offer. But even though I accidentally doomed the citizens of Frostpunk by pissing limited resources away, locked my soldiers in a burning house in Bad North and somehow set fire to a fire extinguisher in Catastronaughts! I had an absolute ball. Here’s some of the games I delightfully failed to succeed in but had a successfully delightful time playing.

FTL: Faster Than Light at times felt like you were a busy chef running an entire kitchen and Overcooked often feels like things are moving at a speed that’s faster than light. So, when Inertia Games delivered the lovechild of these two games it’s not surprising that the concept really works. And that’s exactly what Catastronaughts! is, the frantic co-op challenge of holding a ship together while firing back at the enemy ship while juggling all manner of hazards and obstacles.

The art-style is bright, clear and the characters have a cartoonish bobblehead look to them, each riffing on a character from that famous sci-fi TV show about Treks among Stars. But the quality of the game really comes through in its gameplay and as a co-op party game, that’s precisely how it should be. Over the five levels, each with their own ship layouts, mechanics like picking up and using the ship’s fire extinguishers and toolkits to fix the ship were introduced along with the need to fire your guns and ultimately destroy the enemy. On top of that, some levels were then flavoured with additional environmental challenges, similar to FTL in this regard, like solar flares and ticking bombs spawning all over your ship.

I got a chance to speak to Kieran Newland, the game’s lead developer about this difficulty curve and how it formed a strong focus early on.

“The first phase of our project was just prototyping loads and loads of levels, getting rid of ones that didn’t work and

so now we have quite a refined selection of levels. We have gone through a lot of different mechanics and we rejected a lot of them for how complicated or how unfair they were. For people really into gaming its not loads but we’ve been able to make this accessible for kids and their parents to play.”

It’s intriguing to wonder what didn’t make the cut, but Newland promised that there was still plenty yet to be revealed including an extraction door capable of sucking out a compartment’s air and removing fires… and crew mates. The haphazard and entirely hazardous gameplay was made all the more enjoyable by complications like this and playing with three complete strangers at EGX we had more than a few fatal mistakes. Forgetting to close the door of the ship’s safe zone during a solar flare and somehow trapping a fire extinguisher behind a wall of flames were just two hilarious eventualities that had us commit to our default British overly-apologetic natures. But we were eager to jump right back in and the game knows this with short levels, retries and gameplay that is optimized for dropping in and out. Catastronaughts! is an inspired concept stemming from some great ideas and is incredible fun to play. The game never lets the considerable amount of onscreen challenges or obstacles push you away from enjoying yourself but still puts you to task as fires blaze, hull breaches tear open and you accidentally throw a bomb into the cloning bay and not the airlock. 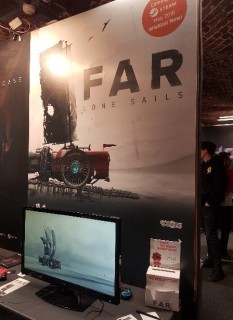 Beginning life as a design prototype of Swiss designer Don Schmocker, Far: Lone Sails is a beautifully atmospheric journey that I only glimpsed an agonisingly short span of. The premise is simple, to drive a peculiar vehicle known as the ‘okomotive’ (sharing the name of the developer behind the game) across a desolate dried-out landscape, maintaining the vehicle and developing it as you steadily chug along.

The jaw-dropping scope of the game’s setting was one of the first aspects to really hit me. Painted across the screen almost in a completely bleached monotone, wreckage and ruins loom large alongside mountain ridges and titanic cloudbanks. And then, tiny by comparison is the okomotive itself, and even tinier than this is the pilot inside who you play as. The chassis of the okomotive features a splash of colour and so you can easily pick it out among the expanse of the landscape around you. But the game gives you the ability to switch between close, mid and wide-range zoom functions with the game’s camera so it’s clear Okomotive knows to put this on a pedestal.

But upon closer inspection, all manner of details within the vehicle’s inner workings pop out at you and you soon come to realize how it doubles as a home as well as a vehicle. The driving functions such as the fuel tank, ignition and heat vent are again picked out in red and the operation of the okomotive through these forms an enjoyable routine that makes you feel like every step travelled is earned. But you’ll notice hooks to hang decorations or abandoned relics on, as well as a sort of handbrake (which I discovered about three hills too late). And so, it soon became clear to me that the game is about driving the okomotive on, but it’s the okomotive as a concept and a piece of design that drives the game to such enjoyable lengths.

Progression through the game is linear and obstructed by a physics and logic puzzles baked into the environment, all of which somehow clear the way for your journey to continue or equip the okomotive with a device that allows you to interact in new ways with it. This act of building and upgrading the machine helps you really bind yourself to it but these puzzle segments also force you to abandon its interior to explore by yourself. These moments often felt anxiously vulnerable as any seasoned gamer tends to put their guard up when leaving their camp or base. But the lack of a direct antagonist really helped make my time with Far: Lone Sails all the more memorable. There’s just a silent loneliness to it all and yet I never once questioned the need to keep moving forward, despite never knowing why I was. The only time this melancholy quiet was dispelled was when I ran out of fuel a few times and had to trek back on foot across the long stretch of landscape that, while beautiful to behold is also… still very long, while I looked for fuel. But that’s almost a perfect representation of the game’s true

adversary really. Watching the okomotive’s engine die, fuelling it up and igniting it is a strangely fulfilling task replete with the emotional rollercoaster of having a car that has actually broken down and having to mend it.

It’s maybe a stretch to say Far: Lone Sails is a survival game, but it still inhabits a desperate, uphill (in a literal sense as well) struggle to stay the course. I can’t wait to play the game in its entirety, whether to see where the journey goes or just to see how the okomotive gets me there. 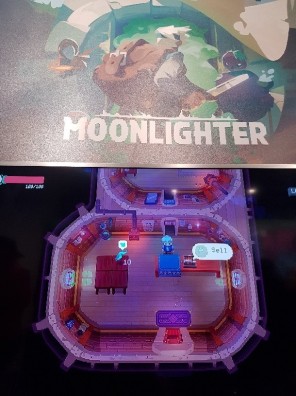 If I hadn’t read the premise of Moonlighter beforehand I’d have walked right by it. That’s a little harsh perhaps, maybe I’d have lingered around the screen it was playing on and said something like, “This game has nothing to do with Mahershala Ali!” But thankfully the world was spared half-brained jokes like this because Moonlighter has a secret weapon.

No wait, don’t go. It’s more than that! Because there’s essentially two games at work in Moonlighter. It’s also… a shop-management sim!

That’s right, in this game you’ll be playing as Will, the inheritor and subsequent proprietor of ‘Moonlighter’, a small-town shop selling gear and valuables to fantasy heroes on their adventures. But when the sun goes down, when business hours are over and you close up shop it’s time for your own heroics on your own adventure. So under the cover of night, Will descends into the dungeons just out of town, battling monsters but more importantly gathering loot which you’ll bring back to your shop to sell.

This idea of playing as a staple NPC of every fantasy adventure game is twist that I couldn’t get enough of and I really hope that the game leans on this to show the more mundane side of someone else’s epic quest. The premise also benefits from a nice underdog feeling from being told you are a merchant, not a hero and then blatantly ignoring this warning. The actual dungeon-crawling is plenty fun with slick controls, some variations in enemy and refreshing procedural level layouts to keep you on your toes. But unexpectedly it was the prospect of coming home with loot that soon became the stock for my shop’s shelves that really appealed to me. Unfortunately, this is where I encountered my first economic problem within the game. I have no idea how much a handful of golem gems is worth in today’s economy.

See, there’s a tutorial for how to operate your shop and how to reflect your customer’s needs but no indication as to what you should start charging people for. 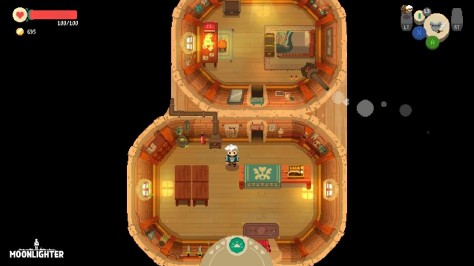 This was unintentionally hilarious as I proceeded to spend most of the demo throwing monster innards onto my store’s display, watching people from behind my counter frown at the price of 200 gold and then slide over to the display to drop it by about 90% in order to gauge the right price. What confused the matter some more was that while many turned their nose at my mint-condition collection of roots and eyeballs, some begrudgingly bought them wholesale rendering my attempts to figure their value out even more difficult. Thankfully Will has a journal which automatically updates the lowest, highest and most popular prices you’ve sold items at, so you don’t need to memorise FTSE figures or track whether or not whetstones are particularly ‘in’ right now. But the rewarding nature of the shop keeping side of the game and the promise of upgrading it and the town around me, made me wonder if maybe I’d enjoy a mundane life over an epic one.

Playing a game demo (a sadly bygone opportunity these days) is a great way to see what’s coming down the pipeline and these three titles reflect an indie presence that’s still growing, still pushing boundaries. Regardless of how well you play these games, there’s some excellent design choices in them all and you’d be doing yourself a favour by checking them out.